I'm fascinated by random tech, always have been.  It's the sort of odd electronic things that you get in those tacky shops on holiday that have always intrigued me.   I figured, as I have this blog now, I could actually review some of them.

So, first up - the Echo 500 Electronic Organ Watch.


I actually owned two of these things back in the mid 1980s, although quite why I bought two is beyond me. They cost about £4 each if I remember rightly, and consisted of a rectangular plastic watch which had a lid that opened to reveal a single octave piano style keyboard and the very basic digital clock on the inside of the lid.

The sound produced was a very electronic sounding bleep, which played for as long as you held the key down, and due to the size of the keys, it was almost impossible to press just one of them.  Most amusingly though, when the batteries were going flat, it produced a sort of dying whine noise decreasing in pitch and volume.

It took two AG-3 / CR-44 batteries in the keyboard, and one in the clock part.
Also, unusually, the instructions on the back of the card were surprisingly detailed, including details and diagrams on how to change the batteries, as well as specs such as stand-by current, and optimistically, some musical score. Not that you'd be able to play it on that keyboard.

All in all, it's a fun little watch, fairly pointless both as a watch and a musical instrument, but ok as a talking point when you're a 10 year old and in 1984.

And now some ratings:

When was it from: The mid-1980s.
Tech level: Low - fairly simple tech
Design: 6/10 - An interesting idea, just a bit too small.
Build quality: 8/10 - Well built, and designed for the batteries to be replaceable. Still works 25 years later!
Geek rating: 8/10 - You need to be fairly geeky to wear one of these

I just found it in the garage, so here are some photos: 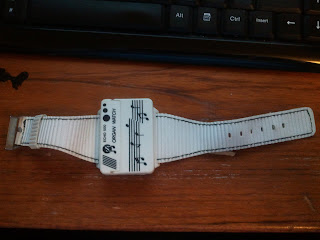 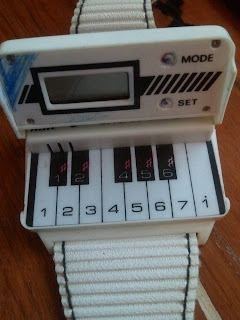